Hey, it's Andrew. Every Friday I share examples, tips and strategies in the newsletter. Sign up in the yellow box below. 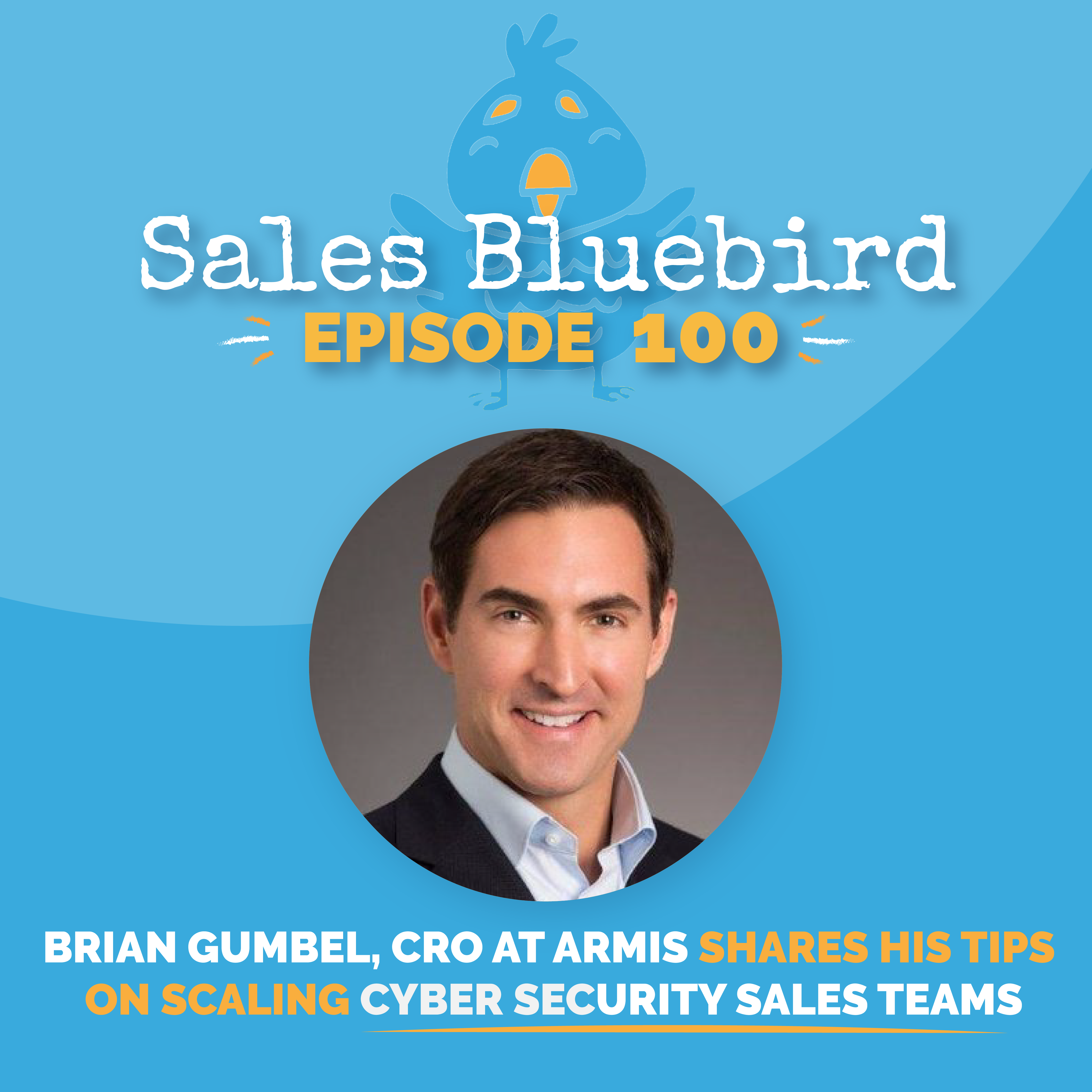 Brian Gumbel, CRO at Armis, talks about 3 biggest takeaways from his experience, success, and journey in the cybersecurity sales world. Here's what we learned.

#1 Don't be afraid to take a perceived step backward to advance your career.  He did this moving from Cisco to Mcafee and moving from McAfee to Tanium.

Brian was with Cisco for almost 8 years. While he was there he did commercial financial business for 3 years and then realized to reach a managerial position, he had to make the switch to the public sector. He ended up staying within the public sector for his remaining time at Cisco and then what did he do?

Well, he left a 100 million dollar business selling to NYC to move on to his new position at McAfee. He knew that if he wanted a leadership position, he was going to have to make the career switch. Although he loved his position at Cisco, he knew it was time for change.

While at McAfee, Gumbel ran the Government Healthcare and Education sector for the Eastern portion of the United States. He was able to build up a small team of about 7 people that ranged all the way from Maine to Florida.

After a few years at McAfee, he decided to interview for the position of Vice President of Northeast of Enterprise and Canada where he ran a team of about 350 people, including 150 sellers. Gumbel loved working at McAfee! His greatest takeaway from the company was the importance of company culture.

From there on out he put culture as number 1 in his career, and it became the greatest factor to consider before making any career change decisions.

From McAfee, Gumbel moved to his position as VP of Americas East and Canada at Tanium. He was one of the first sellers to join Tanium and was drawn in by their fascinating technology, but this change wasn’t easy. Gumbel had a 5 million dollar quota and was reaching the end of the 3rd quarter, 9 months in, and had yet to close a deal. Mentally, it was difficult, but then the last day of the 3rd quarter hit and he made his first sale. Then, by the end of the year, he not only hit his 5 million dollar quote, but surpassed it and reached 22 million.

During his time at Tanium, he learned that even if you want something to happen quickly, you just have to be patient. If you're doing all the right things, the revenue will eventually come. But, Gumbel didn’t join Tanium to be a sales representative, he joined to build a team and that's exactly what he did. In 2 years, he hired 3 regional directors and 18 sales representatives.

#2 It's OK to make mistakes .. Gumbel moved to Sisense for the right reasons, but he quickly realized it wasn't a fit so moved back to cybersecurity

After all of those years, Gumbel made the decision to leave his career in cybersecurity to work at Sisense

Why did he do this? Well, he realized the product at his previous position was aging and it was becoming increasingly more difficult to get customers to buy it, but his main reason was because he wanted to start a family with his husband.

Previously, he was traveling upwards of 300,000 miles a year, and he didn’t want that life as a new father of twins.

While at Sisense, Gumbel quickly realized that he just wasn’t passionate about his new position, and that this position wasn’t for him, and returned back to his career in cybersecurity with Armis.

#3 It is so much easier for a seller to join a new company if they have a really good network in their territory.  It's so hard to cut through the noise and get meetings... if people already know and trust you it is so much easier. It can be the difference between getting 10 meetings in your first 3 months and 30 meetings.

Gumbel shared the top attributes he looks for when hiring. He mentioned how it’s important to look for someone who will fit within the company culture, and of course is a good person with good values.

The next key thing he looks for is a seller that has established relationships with customers and can get quick meetings set up. In our world, there are so many cybersecurity companies out there trying to sell you something and if a sales person doesn't have those relationships, it’s going to take a lot longer to close the deal.

How much do you trust those relationships you’ve established? Could you set up 20 meetings in your first 30 days if asked to?

We ended our conversation with 2 Bullshit LinkedIn Poll Questions.

Question: In your opinion what's the most important factor to thrive in career:

Question: Do you believe luck plays a role in your success?

Answer Yes, have you ever heard of the phrase, the harder you work the luckier you'll become?

We hope you were able to learn something from our conversation with Brian Gumbel and his 3 biggest takeaways from his journey in cybersecurity sales.

If you have any questions or would like to get in contact with Gumbel, you can do so here: gumbel@armis.com.

Check out more small tips and big ideas about how to grow sales faster at your B2B cyber security company at Sales Bluebird. https://www.salesbluebird.com/

Top 10 Sales Podcasts You Don't Want To Miss Out On

Whether you’re a salesperson, business owner, or entrepreneur, staying up-to-date on the latest sales trends and strategies is essential for achiev…

5 ways to be a bold cybersecurity sales person

Does the sales deck you have been "need some work"?

Find out how to dial in your first sales call deck so that prospects just "get it" and want to take another meeting.  Learn more >>>